Wow. What an experience that turned out to be. My last posting was written during the first day of rain when Kelapa Gading (my area in the north side of Jakarta) was flooded but still functioning. Things went quickly downhill from there.

That night, torrential rains began falling and continued throughout the night. My wake up call came in the form of my air conditioner shutting off due to the power being cut. My initial reaction to that is to hit the breaker and go back to bed. Just for kicks, I glanced out the window; my neighborhood had turned into Venice overnight. Luckily, my street sits a couple feet higher than 90% of the other 1000 homes in my neighborhood. Water never entered my home. 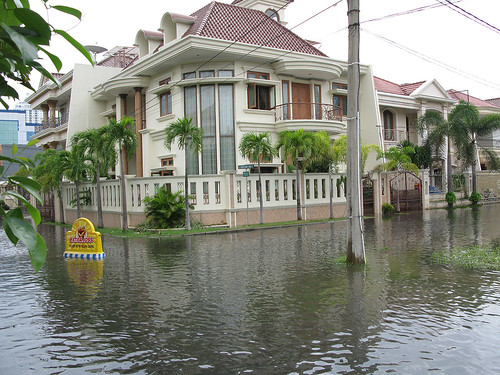 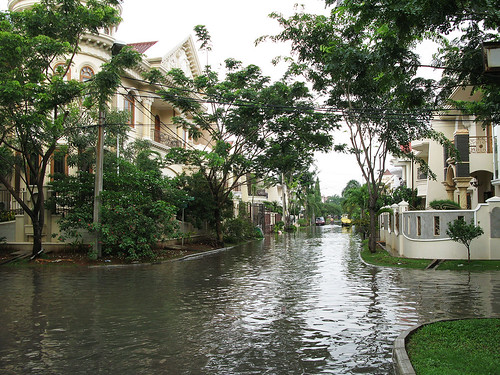 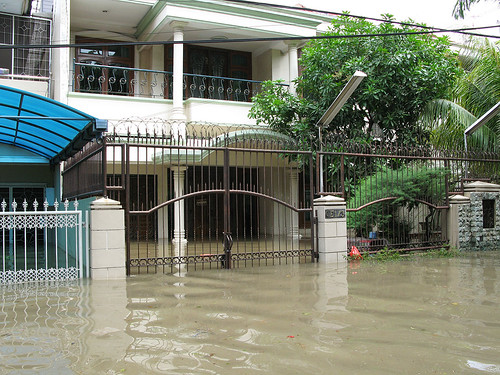 A couple hours later, my friend Ian waded on over from his place a kilometer away. See, Ian and I aren’t the type to really think things through; we thought it’d be a good idea to go out and take some pics and video of the scene. We weren’t considering the fact that some people had died from electrocution, that we were walking around dead rats, sewage, snakes, and random potholes that would swallow us whole. But what we saw was worth every moment of discomfort. 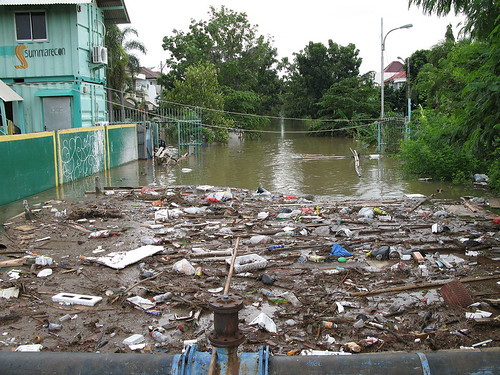 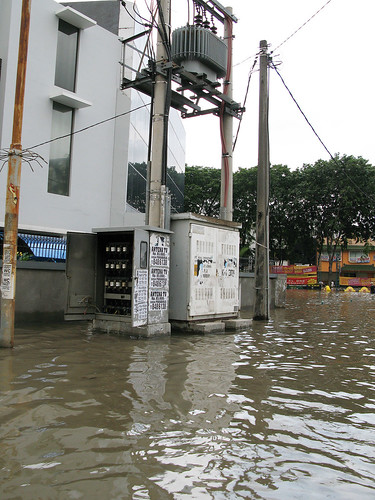 I haven’t seen such an odd scenario since September 11. Remember on that sunny morning when everyone was just walking around in a daze, as if our society was on autopilot? It was like that all over again but without the tragedy and sadness to cope with. The day before, there was a mad dash to get supplies, groceries, and fresh water. This day, those stores were all closed; employees couldn’t get to work, suppliers couldn’t get fresh food, and the electricity was off regardless. 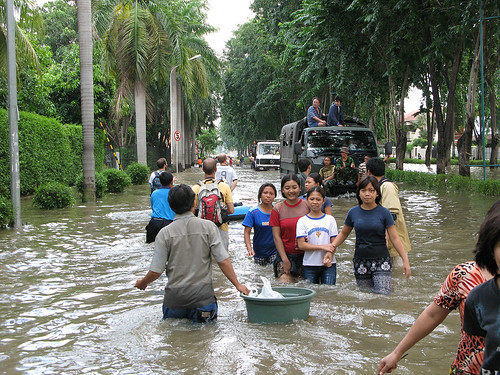 We came to a main intersection near the entrance to my complex, and it felt like a scene out of a sci-fi movie. Helicopters soaring overhead, Marines and military driving around, heavy-duty rafts being deployed, and cars trying to swim their way out of Kelapa Gading. One large such truck was plowing its way through the intersection, only to come to a smashing dead stop when it crashed into an unseen curb covered with water. 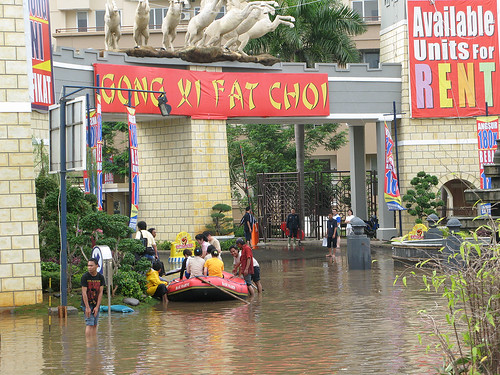 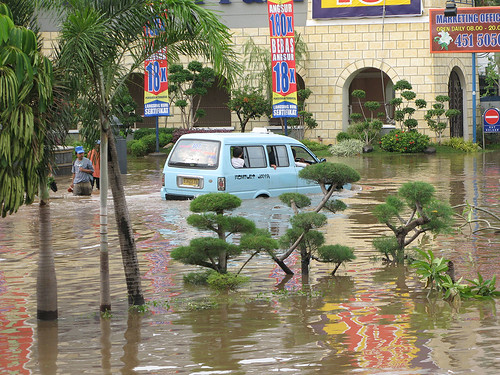 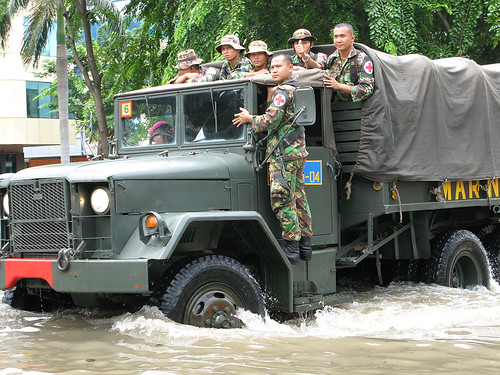 Turning the corner, we came to the boulevard which connects our area to the shopping centers. It’s a very wide, palm lined street with a large canal separating the two lanes. We saw a guy swim from one road to the other side, traversing the vile canal with no problem. It was later said that some of the construction workers were sucking the soupy water into their mouths and then spitting it out at each other. My stomach turns visualizing that.

We knew that things would be better off if we got out of our home, especially if the rains persisted, so I took a raft over to my home to float some of my more “valuable” possessions 😉 to my workplace, where 15 or so of my colleagues were camping out. However, as night fell on the city, the gravity of the situation settled on us like a damp fog: limited fresh water, limited drinking water, only a couple days worth of food, electricity powered by a generator that had to be supplied with fuel (who would operate it and bring fuel?), and total isolation in most regards. That was the point where the situation took a sharp turn from being “interesting” to being a bit disturbing. 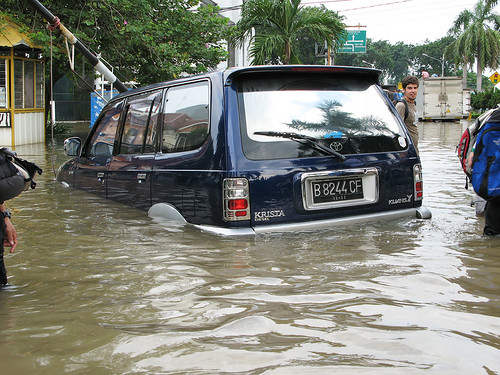 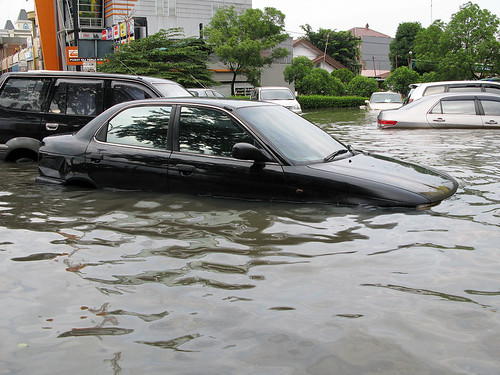 After quite a hassle, a quarter of us split up from the group and decided enough was enough. Some of the security guards managed to flag down a massive truck – the only ones which were able to get through the waist high water at this point. For $200 they agreed to take us to a hotel downtown.

So here we were, at 10pm a few bule in the back of a massive dump-truck like vehicle, pushing our way through chest-high water. We were told to pick up the headmaster’s family before going downtown, so the search for a safe passageway began. Most of the roads were flooded so badly that even the monster we were in couldn’t get through, and after three failed attempts, we had to make the decision to leave them – without a raft, there was no way to get to them. Luckily their apartment was still doing alright despite being stranded.

Speeding along the toll roads in the back of this thing was quite a trip. Jakarta’s main toll roads were built raised above the city-level, so most times you’re actually quite high up. Generally this is no big deal, but one false move, and we would have careened over the 3 foot concrete shoulder; it was a 60 foot drop from the road were were on to the streets below.

Pulling up to the hotel in a truck like this isn’t something I’d recommend to anyone. We looked like genuine refugees (and probably smelled like it too). The looks we received were a mix of pity and wonderment.

Unfortunately, as relieved as we were to be out of Kelapa Gading, that hotel’s water line broke, allowing brownish mystery water to flow back into the showers and toilets, so we switched to the Grand Hyatt – not a bad place to spend a day or two.

Now I know the story would be much more interesting if I could say that our hardships continued, but the truth is that last Tuesday, we’d had enough. After receiving news that we weren’t expected to be back at work for almost another week, a large group of us flew to Bali. Unlike other trips to the island, I didn’t have my camera, and didn’t bother renting a car to tour around. We simply lounged around the beach and the pool at the Kumala Pantai in Seminyak. Considering we had to cancel our Christmas plans to travel, this was a much needed break from Jakarta.

Sunday night, we returned to Jakarta not knowing what to expect. Luckily my house and car were not flooded, although our running water is still not working properly and our refrigerator decided to die on us. Kelapa Gading is back in action, although the streets are a bit dirty and piles of rubbish dot the side of the roads, things are almost back to normal. Many of my colleagues’ homes, unfortunately, were flooded and damaged. Some had their cars flooded as well. The clean-up and replacement costs could be significant. In contrast, many of the Indonesian staff who work with us live in homes which were flooded to nearly 2 meters – they’ve surely lost most of their belongings. I hope we can pull together as a staff to help them in this time of need.

So why did Kelapa Gading get flooded so badly? According to the Jakarta Post, much of my area is actually below sea level. I suppose that makes sense, seeing as the Dutch were responsible for the civil engineering throughout this city. It’s scary to think that this same thing happened (to a somewhat lesser degree) in 2002, and yet they promised that it wouldn’t happen again. I’m only 3 km from the ocean, so no matter what they plan, I doubt water will be in a hurry to clear out. 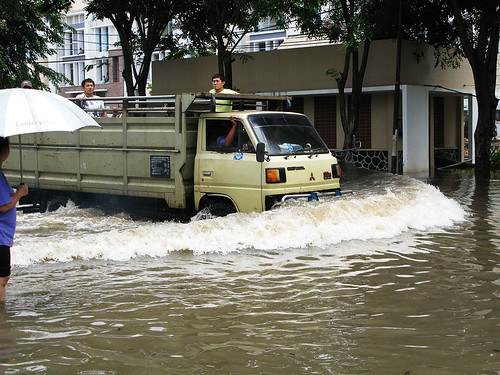 There’s been a boom of construction in my part of the city since I first arrived; huge malls, shopping centers, apartment complexes, a sports arena, and countless restaurants. It’s been a mad dash to pour concrete over any area of green. So when the rains arrive – where’s the water supposed to go? 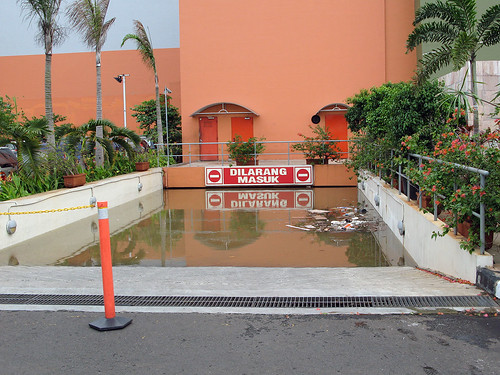 Surely the flooding is due to a number of factors ranging from the deforestation of the volcanic highlands which surround Jakarta, the filth and garbage blocking the main rivers and canals, the lack of a large-scale canal to draw the water away, and of course the concrete conundrum. Is there much else that could have been done? I’d like to think so. 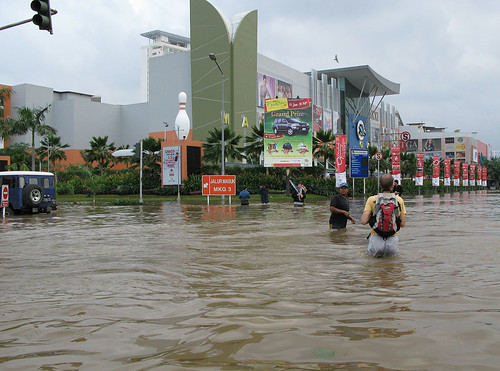 It’s said that these huge floods occur every five years on average – meaning they knew this was coming, and yet, the city was just as unprepared as ever. Will property value plummet in my area of Kelapa Gading? Will the huge mansions sell off like hot-cakes? Will the people with Jaguars, Mercedes, and Beamers move to higher ground? Will the massive malls become ghost towns? Will the perpetual line at J-Co donuts finally dry up? Will the never-ending construction come to a grinding halt?

All very unlikely. And why? Well, hell, they’ve got another five years to worry about it!

More photos may be seen here.

A flight centre comes in real handy when you donÃ­t have travel guides and need to keep track of your flights. Similarly a planner is good to keep a record of all the hotel reservations you have and the quality of hotel rooms too. That way you can plan on the travel accessories you will be traveling with. For example, with orlando hotel reservations you wont need anything extra.