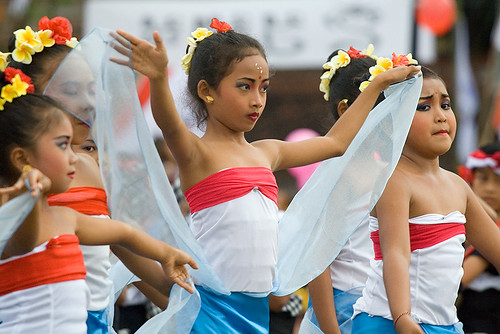 We were lucky enough to hit Ubud just as the city’s annual festival broke into full swing. On the opening day, the streets were swarming with energy. Thousands of people were lining every path, every street, and every inch of sidewalk. I’ve never seen such crowds in Ubud. They were all in anticipation of the parading artists and dancers, each offering a different style of dance and all heading to the football fields for a final display.

We made our way to the football field in the center of the city, claiming a front row seat and eagerly awaited the arriving dancers. As thousands of others joined us, the first parade filtered onto the field. Stepping into the makeshift stage, which was no more than a section of the field designated for that purpose, the show was about to begin. The dancers began their routine facing away from us, but surely they’d turn around and show the hundreds of spectators the dance from our view as well – right? Wrong. To our disappointment, we sat in exactly the wrong spot for viewing the dances. The performers scheduled to make appearances would all be showing us their backside.

An hour or so into the performance, I finally gave up my spot in hopes of getting to higher ground so I could actually see their faces. I managed to squeeze behind some Balinese men who were fortunately a few inches shorter than me and cranked out some mediocre photos. Oh well. Surely some of the other foreigners in the crowds will have exactly the same photos as me – I’ll know as soon as I put them on flickr.

We’ve also been down to the new Bvulgari Hotel in Nusa Dua numerous times as Nana (Novita’s sister) is possibly going to accept a position there. What a gorgeous hotel! Breathtaking views of Bali’s southernmost shore, an infinity pool 50 meters over the crashing waves, and a price tag of ‘only’ $1000 / night. Not. Just. Yet.

The job of a travel agent is to make you cheap travel deals and your miami hotel reservations. It is the task of a travel advisor, to tip you on getting reservations in a new york hotel instead on the running rates of toronto canada hotels.